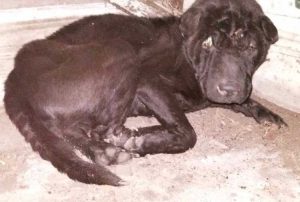 Eve, named for the night she was rushed into our care on Halloween Eve, was picked up after wandering around a neighborhood for days rail thin and starving. Neighbors had witnessed her seeking shelter under the stairs of an abandoned home, one family opened their doors and offered her shelter and a bowl of food. Upon getting her into their garage, they soon realized the extent of her needs and reached out to Last Hope for help.  We rushed Eve to Eastern Iowa Veterinary Specialty Center, hopeful we could do something for her. We learned that Eve was suffering from the end stages of renal failure, essentially her organs were starting to shut down.  Eve weighed a mere 21 pounds 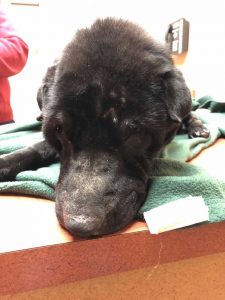 upon intake, a far cry from the typical weight of an adult Shar Pei (40-55 pounds).

It is our fear that Eve was dumped by an owner that learned she was sick and chose not to care for her.  She had likely wandered for some time, starving and cold.  Her eyes were nearly matted shut from entropion, an ulcer had formed on one eye blurring her vision.  The staff at EIVSC took amazing care of Eve, cleaning her eyes and face while pushing fluids and working to stabilize her.  Unfortunately, a mere 24 hours later on Halloween night, the difficult decision to let Eve go was made.  She was not passing urine and her body was accumulating waste, her vital signs were diminishing and she was starting to further shut down.  Eve died surrounded by new friends who held and comforted her, promising her that we would seek justice for Eve and someday meet her at the foot of the rainbow bridge. 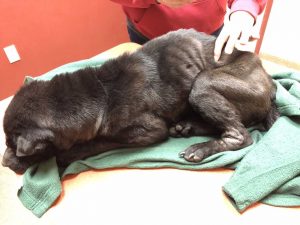 So in Eve’s name, we ask you to please consider adoption and to support your local rescue groups.  If you see an animal that you fear is in need, please speak up sooner rather than later.  Every dog deserves a warm bed and a full bowl. A family to love them dearly, to care for them in the good moments and guide them through the not so good moments.  Adding a dog to your family is a forever choice, not an “until” choice. Please consider donating to Last Hope Animal Rescue today, your support is much appreciated. To make a donation please click HERE.