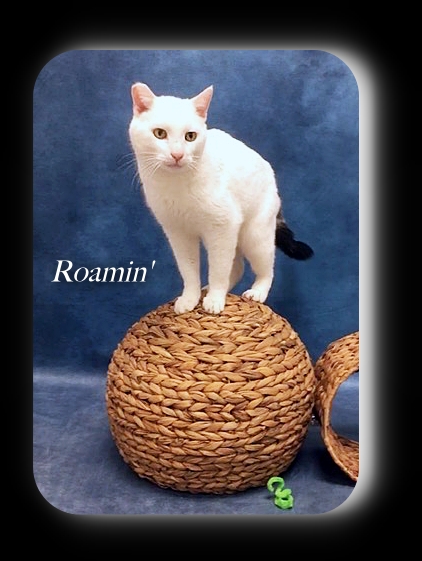 Introducing ROAMIN’… Doesn’t he have the coolest fur coat?  Check him out!  He is totally white until you get to his tail – and his tail is an unexpected SOLID BLACK!  He also has a big spot of black fur on the bottom left rear paw ( looks like he stepped on an ink pad!) and a little dot of black on his right rear paw, too!  AND his eyes are the lightest yellow color this foster mom has ever seen!  He’s just a real COOL CAT who is super friendly, loving, vocal, and just an overall great cat who needs a loving home!  He’s rather tall 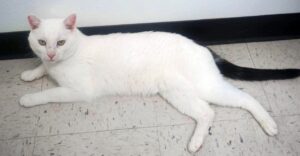 for a cat too – which makes him very striking when you see him strolling towards you – like a model!! 🙂 He got his name from how he was found… he was ROAMIN’ around a dangerous highway and apparently had been out on his own for a while as he was quite thin.

Roamin’ has a very sweet personality, he’s affectionate, talkative, (and for a big boy, he has a rather soft ‘voice’) and enjoys resting on a soft bed and kneading his paws!  So far he hasn’t been too interested in toys other than a catnip toy; we guesstimate he is about 6 years old and don’t know if he’s ever even had toys to play with!

The adoption fee for Roamin’ is $85 and includes neuter surgery, being up to date on vaccinations and preventives, and a microchip with free lifetime registration.