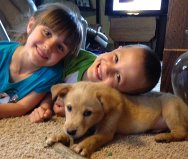 Gina and her family, Tim, Mackenzie, and Nolan (and their cat, Pete!) adopted Roscoe in May and they couldn’t be happier with their new little pup!

Roscoe (formerly Baby Baxter) came from Arkansas and Gina knew as soon as she saw the pictures that she was interested in the the yellow Lab. They went to see Roscoe on May 4th and she said it was love at first sight. They shopped for items for Roscoe and had to wait until the 7th until they were able to pick him up. They thought about him and missed him until they picked him up.
Since then he’s fit into the family in a great way. He loves to be near his new family whether they are walking the yard or working in the garden. Gina says, “I think that being an adopted dog, he knows that and is so happy that he lives in our home. He has a wonderfully sweet, fun personality.” 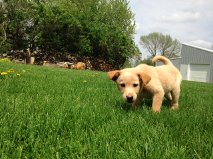 It wasn’t much of an adjustment for the family – he just seemed to fit right in and he’s already playing fetch.
“Our life is filled with more love and laughter watching this sweet pup run, tumble, play, and bark.”