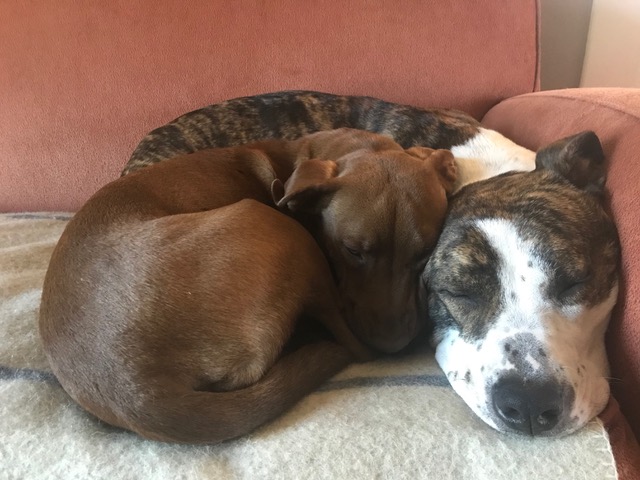 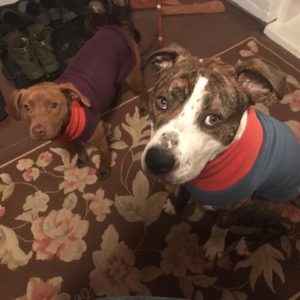 Jason and Christine had lost two senior dogs several months prior to looking for another dog to add to their family. They wanted to find younger dogs and searched online and found Last Hope’s webpage. She found Poppy (formerly Payton) and in the pictures, she looked like she had lots of spunk and charm. Reggie and Poppy had already bonded in their foster home and we wanted them to be adopted together.

Christine said the process to adopt was thorough and that she appreciates the care Last Hope took in finding the perfect home for Reggie and Poppy. After their application was approved it was time for a home visit and Christine was determined that it would go well – she cleaned the house like they were putting it on the market! 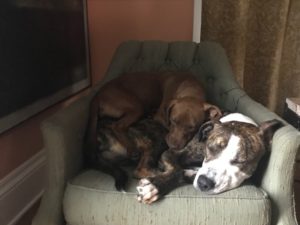 The home visit did go well and Reggie and Poppy came to live with Jason and Christine. They say they are doing really well and, important for energetic puppies, are not home alone for more than five hours at a time.

The adjustment period had some minor challenges which are to be expected, but they’ve come a long way in six months and Christine and Jason have loved getting to know them.

Reggie and Poppy demand a lot of exercise but after they are done rough-housing with each other, they are snuggle bears and are convinced they are

both big lap dogs! They even bought a new couch so everyone could fit on it at once. During the tough winter, they still went on walks with the proper attire – fleece jackets and booties.

They also love their chew toys and have a complex hierarchy of favorite toys. Reggie and Poppy love to wrestle then curl up together for naps.

Christine says, “We are so thankful to Last Hope for saving Reggie and Poppy. Reggie came to Iowa with his sister Legacy (Lucy). Both were five months old and two days away from euthanasia. Poppy was six months old and since she did not get adopted in time, she was also slated for euthanasia. These dogs are so loving and wonderful it breaks my heart to think they almost didn’t get a chance. Thanks, Last Hope!”

Thank you, Jason and Christine, for opening your home and making room for Reggie and Poppy – they hit the forever home jackpot!