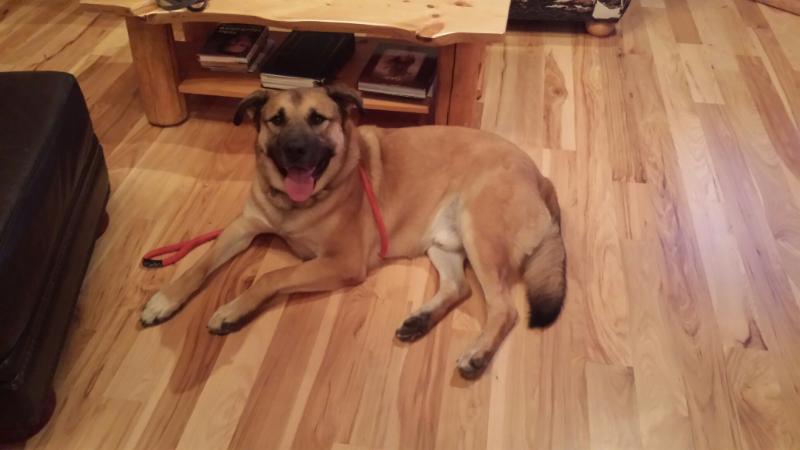 “Hi. My name is River. You may remember me as the big, bossy guy at the Center where I had been since they moved to the building on 16th Ave. My people now are Dan and Penny. They used to have a dog but not for five years. When they decided life was too stressful without a furry friend, Penny did a search on the web for dogs to adopt in this area. There were a lot to choose from but she liked me best! My bio online said I was extra-large and liked to snuggle, which won her over. A friend of hers recommended Last Hope because his wife is familiar with the great people there. Penny started to fill out the adoption form and chickened out. It was almost two weeks before she contacted the Center to see if I would be at an adoption event. Since I don’t like crowds I never went to those events so they met other dogs at the event then came to the Center to meet me without others to distract us.
I liked Dan the first thing when I saw him and gave him a big kiss. Penny was okay as long as she didn’t bother me when I was playing with Dan. (I might have growled at her a couple of times.) While they talked with Cathy, I plopped down and stared at my reflection in the glass door. I was sad when Dan left. Two days later when Cathy took me to their house I knew I had to be nice to Penny, too, because I wanted to stay there. I haven’t growled at her since, but I do give her the stink eye sometimes when she interrupts Dan petting me. She feeds me and gives me lots of snuggles and yummy treats so I like her almost as much as Dan.
The first few days I went to their office in town with them. But I didn’t like when people bothered Penny or Dan so I growled at them and they were afraid (as they were supposed to be). The three of us went to a trainer and he thinks I’m frightened (shhh, don’t tell anyone this big guy is afraid). So now I stay home in my crate while they are at the office. I get some good naps in and my crate faces a mirror so I can look at myself. But the best part is when they come home every day. I get to go patrol the yard and eat and then snuggle with them. Some days I even get to go back to town with them in the truck!
We had company for a couple of days. I wasn’t very nice to the company but I was afraid they were going to make me go back to the Center. The Center is a nice place, but I like having my own room and no “meows” around. I do have to chase the squirrels and the deer away. It’s my yard now and I’m not going to share! I know it bother Penny and Dan when I growl at other people, but it’s going to take a while. They work with me a lot to help me focus on things I like so I don’t get so upset, but sometimes it’s just too much for me. When no one else is around I am very relaxed and love my new home. I’m pretty sure they like me, too!”
*Thanks to Penny for writing this for River!