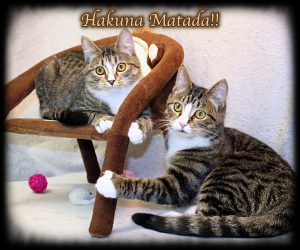 Hakuna Matata!  What a Wonderful phrase!   Hakuna Matata!  Ain’t no passing craze! It means… NO WORRIES – for the rest of your days!  It’s our problem free… philosophy.. HAKUNA MATATA! If you are a fan of the Disney movie The Lion King, or the hit Broadway musical, you probably just sang those words, didn’t ya!?  When these two adorable kittens were rescued along with their (feral?) mama, after having been spotted in the bushes near a walkway near the UNI campus, we said right away… Hey sweeties… No worries, for the rest of your days!  SO… We have our very own HAKUNA & MATATA, rescued right here in the Cedar Valley area – not from the savannah plains of Africa! 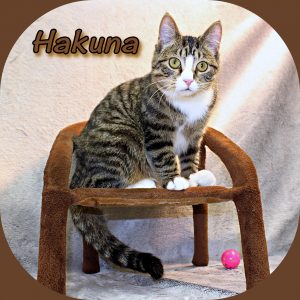 Their amazing Bengal like fur coat is soft as silk!  The brown Tabby and white markings are stunning!  They really do resemble jungle cats!  The only way we’ve been able to tell them apart until we got to know them was, Hakuna has a PINK NOSE and a wide white blaze up his nose – and Matata has a BROWN NOSE, with a darling hour-glass shaped white blaze up her nose!  Plus Matata was a bit hissy, which Hakuna has never been!   Hakuna is a very sweet boy and was easier to work with right from the start.  He came in with a sore on his neck, and originally it looked like an injury starting to heal so he was given medication and a Convenia shot to help it heal.  However, it never healed completely and he had to eventually have surgery on it.  We never really figured out what it was, but the testing proved nothing contagious or dangerous to his health, and it is completely healed now!   He is gentle and purrs easily and likes to be held or snuggle up around your chest/throat – where he was cuddled when he was little.  He loves to play with toys and cuddle with Matata!  SO much so, that we want them ADOPTED TOGETHER because they are very bonded!  Hakuna may do fine by himself, but we really think Matata would do much better if adopted with her brother!

Hakuna has grown SO MUCH and is a lot bigger than Matata; she looks really petite beside him now!  But don’t let that fool you – she can/will hold her own!! They will probably do fine with another cat if properly introduced, but you will want to keep them in a separate room for a couple of weeks so they can acclimate to the sights, sounds, and smells of their new home.  Introduce to any new pets slowly.  They didn’t mind the friendly small dog who came in to visit them – Hakuna really liked Yogi – but Matata was a bit more reserved.  They will probably do fine with a friendly, nonaggressive dog if properly introduced, too. 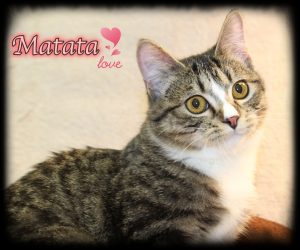 Matata was very attached to her mama when rescued, and she was quite the little hissy kitten and so ‘fierce’!  She never tried to bite or smack at you, but she would lay those ears back and hiss up a storm!  We could easily pick her up, but she wasn’t very content and took the first opportunity to fly out of our arms and back into her cage!  She would hide so you couldn’t pick her up, too.  But after awhile, she finally wore down, and ‘lo and behold, now she is sweet as pie, talks to her foster mom all the time, wants attention and to be petted (especially down her back and up her tail!), and doesn’t mind being picked up and held now!  She loves to bat at hanging toys, and loves to chase and romp with Hakuna – her bestest buddy!  And OH how she loves to cuddle with him! 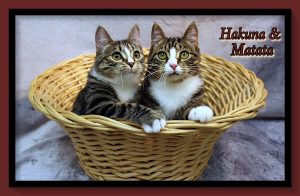 They really haven’t been around young children, and we think older children who are used to being around cats would be a better fit than little ones, as they may scare them. They were probably born in late July or early August 2017, so they are about 7 months old as of Feb. 1, 2018.

If you’re interested in Hakuna and Matata, please complete an application HERE or email adoptions@adopthope.org.