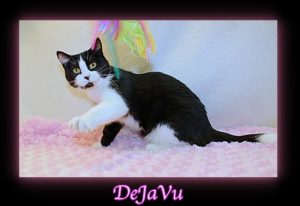 When you are involved in a rescue of several cats at one time, it’s like deja vu when you find yet another black & white beauty!  So that’s how this sweetheart got her name… we thought De Ja Vu would be the purrfect name for her!  She is a black & white domestic shorthair female and is guesstimated to be about 3-4 years old as of July 2017.   When rescued, we had no idea which cats were the mama kitties to the 4 kittens we found – 3 of which were about 5 weeks old and one which was about 2 weeks old or so.  De Ja Vu took to the little gray & white baby (we named Rio) so we assumed she was his mama, but the other mama wasn’t interested in nursing her three babies, so De Ja Vu lovingly accepted them and nursed them, too!  Such a sweet, loving girl who had gone through a lot being rescued from a flooded home, but she wasn’t about to neglect the babies!

Don’t you just love that adorable face with that cute little black splotch on her nose – and those eyes… the gorgeous gold eyes!  WOW! She’s rather petite, and just absolutely loves to be petted and loved on!  She might be a tad bit timid when she first meets you, but that doesn’t last long if you show her some love and attention! She’s still quite young, so she has years and years of love to share with you!  She’s been around other cats, so should do fine if properly introduced to others; dogs are unknown.  She’s such a sweet girl, we think she’ll do great with kids, too – if properly introduced!

De Ja Vu’s adoption fee is $85 which includes spay surgery, being up to date on vaccinations, and a microchip. If you’re interested in this cutie, please complete an application HERE or email adoptions@adopthope.org.