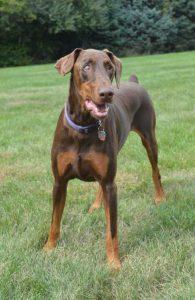 Gibby, formerly Gimpy, was adopted by Mike and Alyssa and he is fitting into their family really well. Gibby is blind in one eye but that didn’t cause the adopters any hesitation – they already had a Doberman that is blind in one eye so they thought he would fit in great. And he has! 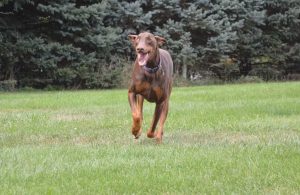 They found Gibby on our website and quickly began the process of adopting him. Once he was in the home, there was an adjustment period for a couple weeks. Their dog had the run of the house by himself for over eight years, but the two dogs soon worked out their pecking order and all was well.

Gibby is a very intelligent dog and knows all the basic commands. He even waits patiently for his food and for him to be told it’s okay to eat. He loves to run in their large backyard and also just lay in the grass outside. Gibby likes to go for walks and loves treats!

Mike says he has never adopted a grown dog before; he always raised them from puppies. He says, “But this guy taught me that there are great full-grown dogs out there who desperately need a home! I would adopt an adult dog again in a heartbeat!”

We’re so glad Gibby found such a great home and is fitting in so well! And we’re glad an adult dog was given a chance to show how much love he still had to give. Happy life, Gibby!