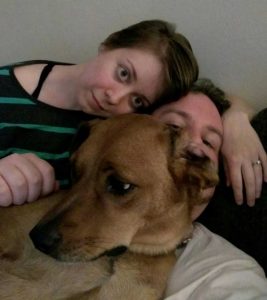 On the one year anniversary of Bosco’s adoption, Emily sent us an email telling us about the year Emily and Chris had with their new furbaby. We LOVE getting updates about Last Hope alums! Here is how their year went:

The first few weeks were, to be honest, a little challenging. It took a little bit of time for Bosco to get used to his new home, which happens sometimes when you adopt. During that initial period they figured out that Bosco is a Coonhound mix which shed some light on some of his behaviors like chasing rabbits and squirrels and alerting the whole neighborhood when there’s something in a tree! This prey drive meant they dare not introduce Bosco to their two rabbits but they’ve all lived separate happily.

Emily and Chris took him to obedience classes (which we highly recommend) in which he completed levels one and two and he also went through Agility class (which he loved). He knows the commands sit, down, heel, stay, target, play dead, through (he runs between their legs), shake, high five, get away, jump (through a hula hoop), and his most recent task, roll over. Emily and Chris really did their homework with Bosco to teach him so many tasks. However, one downfall to him learning to jump was that he realized he 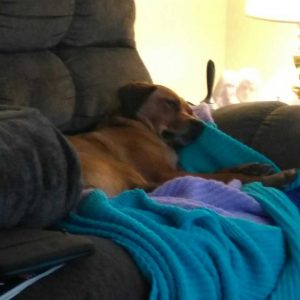 could jump over their fence. But they replaced it with a five foot privacy fence and that fixed that. They report that Bosco is reactive on a leash – especially nervous around bigger dogs and male dogs – but in his new backyard he gets plenty of exercise.

Like so many new pet parents they began with rules about staying off the furniture. Emily says that was a quaint notion! But by allowing Bosco on the furniture they have realized that he’s super cuddly. And he doesn’t want to sit NEAR them, he wants to sit ON them. They now love the cuddle time with him.

Bosco loves to disembowel stuffed toys! They tried the “tuffy” toys that are more 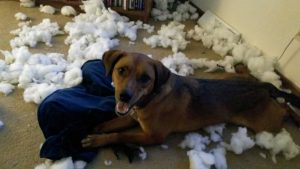 sturdily built and they stumped him for a couple weeks, but then he learned how to chew open the seams and get the stuffing and squeaker out in about 10 minutes. He now only gets stuffies on special occasions.

It sounds like Bosco really hit the jackpot with Emily and Chris! It was a little difficult in the beginning but they took their responsibility seriously and stuck it out until he learned how to live in their house. Sometimes there is that adjustment period that you have to make it through but there are so many rewards on the other side!

Thank you, Emily and Chris for giving Bosco such a good and loving home! And thank you for sharing your first year together with all of us.