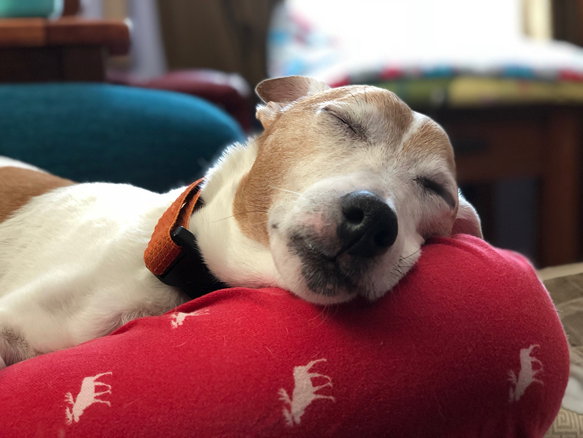 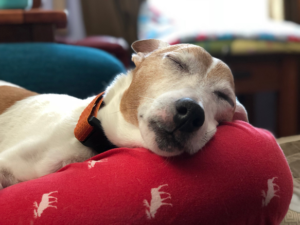 Natalie and Jerry adopted Baxter from Last Hope after searching online for a local rescue. They were looking for a small senior dog to fit into their family of senior furbabies. They also wanted to adopt a senior pet because they know that seniors have a harder time getting adopted.

They appreciated the thorough application process because they acknowledge that doing reference checks and a home visit is necessary to make sure the right pet is going to the right home. The entire process took less than a week and they say it was worth the short wait!

Natalie and Jerry figured that he had the name Baxter for his whole life so they didn’t want to change it, but they did give him the middle name, Banjo. 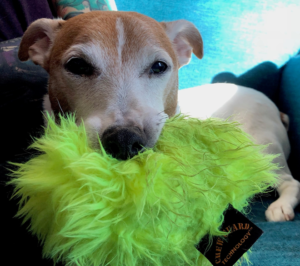 Baxter settled into their home quickly. The foster mom suggested having him sleep in a crate until he and their other dog got fully acquainted. Well, that lasted one night and then Baxter was up on the bed and has been there ever since – sleeping on a pillow!

Baxter loves to chase squirrels and chipmunks with their other dog, Malachi. He also likes toys and hides them under the bed. He loves going for walks but his favorite pastime is sleeping next to his family and that’s their favorite thing, too. 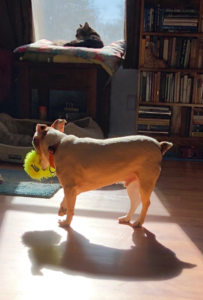 After they adopted Baxter they learned that he was born on December 10, 2005. The dog they lost to cancer last summer, Samson, was born on December 9, 2005. They took that as a sign that Baxter belonged with them. They say, “We hope more people will consider adopting seniors. They are not as energetic as puppies and they offer a ton of love!”

Natalie and Jerry, we’re so happy that you gave Baxter such a great life with you and your other furbabies. Thank you for opening your hearts to a senior dog! 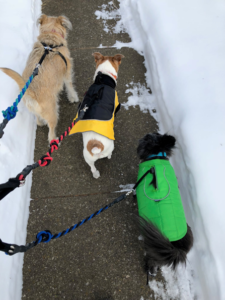