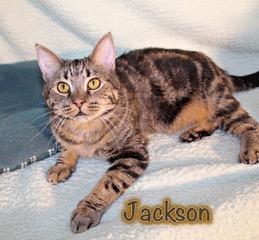 Jackson came to LHAR from a hoarding situation in CR, along with about 30 other kitties. He was quite scared when he first came in, but when moved to his foster home, within a couple of days he was seeking attention!  He is a LAP KITTY and LOVES to snuggle on your lap, nuzzle your face, give head bumps – and drools while he is in absolute heaven with the attention he is getting! (His foster mom affectionately calls him ‘Mr. Jackson Drooler’).  He has a love for CATNIP toys and plays with toys like he is still a kitten!  He uses his litter box faithfully, but will need a box with HIGH sides; if not, he might accidentally overshoot the sides even though he is inside his litter box. He’s a very sweet boy who will do best if kept in a confined area when you first take him home so he gets used to all the sights, sounds and smells in his new environment – which shouldn’t take him very long! He gets along with other kitties, too, and he’d probably love to have a companion!  As of January 2017, we believe he is about 3 years old.  This gorgeous boy has the most beautiful Brown Marbled Tabby markings – with a big BULLSEYE pattern on both of his sides, and several other symmetrical markings elsewhere which are really, really cool! 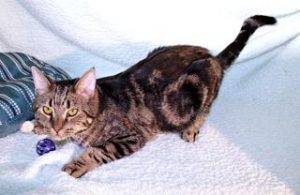 UPDATE 5/4/17…  Jackson is such a sweetheart!  He is a big goofy boy who now resides with two older kittens, (Rusty and Tig, also available for adoption) and they are getting along fabulously!  He did not even hiss once when being introduced to them, and acted like they were already family when they were put together!  He is gentle and purrs all the time – he just loves people!  He even comes when you call him!  He is so deserving of a loving home where he will be the love of someone’s life… How about yours?

If you’re interested in Jackson, please complete an application HERE or email adoptions@adopthope.org.