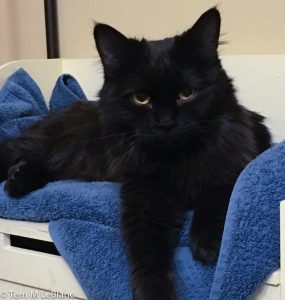 Terri, her husband Jay, and their cat Coal adopted Selene (formerly Riviera) recently and all are doing really well. Terri heard about Last Hope from a couple co-workers who spoke highly of the organization. Terri and Jay were looking for an addition to their family after they had to say goodbye to their cat, Asche around Thanksgiving of 2017. They attended a cat adoption event in December and rather than them picking a cat, Selene picked them. Normally shy and timid, she came right up to Jay and the decision was made!

They began the adoption process and say they were impressed with how thorough the process was. When Selene first went home with them, they kept her in a separate room from their cat, Coal. They let Selene out a couple times to explore the rest of the condo and each time she found her way into the interior of a reclining love seat which took some creative extraction techniques to get her out of! But she is all settled in now

and everyone is getting along great.

Terri says that knowing how shy all the Last Hope volunteers said Selene was, they would be surprised by how active, playful, and attention-seeking she is now that she is in her forever home. She’s not afraid to call to them from other rooms or run into the room at full-tilt with a toy in her mouth looking for someone to play with.

There are many things to like about Selene but a couple of them are the cooing sound she makes when she wants attention or is happy and how smart she is. Just from observing Coal sitting and waiting for a treat, Selene learned to do the same. She enjoys playing with a laser light with Jay, she likes to annoy and play with Coal, she loves to carry around toys and call loudly and proudly that she’s made a “kill,” and she enjoys sitting in the cat tree in front of the patio door and watching the sparrows outside. 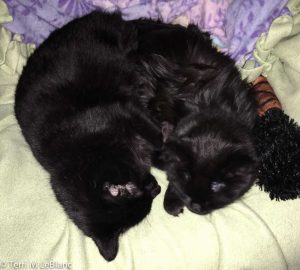 Terri says, “To everyone who thinks black cats are unlucky, we highly disagree!  Our two black cats, Coal and now Selene, have brought much joy and happiness to our lives. It’s easy for us to see why the ancient Egyptians revered and worshiped all cats including black ones!”

It’s obvious Selene picked the right family! Thank you, Terri, Jay, and Coal for opening your home and hearts to Selene.