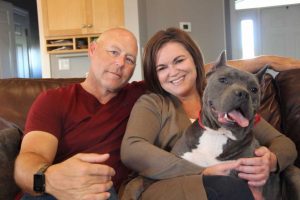 Howie’s story starts with him being thrown out of a moving vehicle on the SE side of Cedar Rapids. Luckily a couple saved him and brought him to Last Hope. He had mange and terrible worms and was quite a sight. Howie had to have surgery on his rectum because of the worms and was treated for mange. He still gets weekly baths for the mange but, thanks to the work of Last Hope volunteers and generous contributions he has had a miraculous recovery. 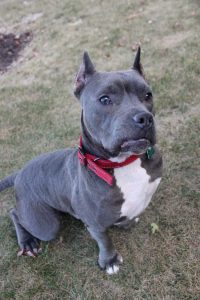 Enter Megan! She saw Howie at the Adoption Center after a volunteer took him for a walk and it was love at first sight. Megan and her husband, Mike, have been fostering dogs for Last Hope for a few years and focus on fostering Pit Bulls. She says they are sometimes difficult to get adopted because of the unfair negative stigma associated with them so they need fosters that can potentially keep them longer than other dogs. Megan and Mike had lost their dog, Bentley in March of 2016 to a brain tumor. They still had a yellow Lab, Nala at home and were looking for another permanent dog but knew it would take time to find just the right one.

And then Megan saw Howie and she knew he was the dog. So Megan and Mike took in Howie and gave him a wonderful forever home. Howie adjusted very quickly to his new home and family. He’s still working on house training and they are looking 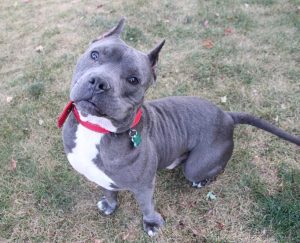 forward to when he can be trusted to be out of his kennel while they are gone.

He has a bed that he loves and a basket full of toys that he loves to take out at night and play with. He’s very attached to Mike and loves to follow him around the house. In the future Mike would like to train Howie to go golfing with him!

Megan says Howie is a very affectionate dog and seems to really appreciate the home they have given him. His favorite time of the day is 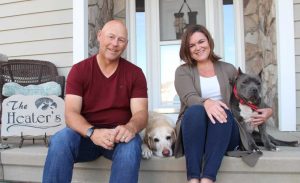 when they sit down for the night because he thinks he’s a lap dog!

Thank you, Megan and Mike for opening your home and hearts to Howie who had such a rough start. He found the perfect forever family.