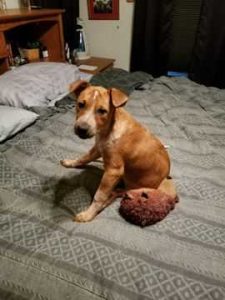 While searching for a dog to adopt, Mary Dee came across Eddie’s picture and bio and knew she wanted to meet him. She says the process to adopt was thorough but only took about a week although, like a kid at Christmas, she was eager to get Eddie home so it seemed to take much longer!

Once Eddie came home she considered changing his name but then she found out he was named after a character in National Lampoon’s Christmas Vacation she knew she should keep the name because it’s one of her favorite movies. And the name Eddie just seems to fit him. Mary Dee has joked that his mobster name is Lefty because his right ear stands up but his left ear flops! And, like the other dogs she’s had in her life her brother calls him Spot.

Mary Dee says the transition was pretty smooth when she brought Eddie home. He had two minor accidents in the house but it’s been smooth sailing since then. She works for her family’s business so she’s lucky to be able to bring him to work with her. He has bowls and toys there and it’s like a second home for him. 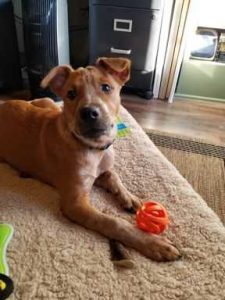 As you can tell from his pictures, he’s very cute and Mary Dee says she’s taken him to the pet store a few times and people comment on his cuteness. Besides that though, she says he’s very intelligent and has an amazing personality and eyes that can touch your soul.

Eddie loves to chase his ball and he’s very good at it although Mary Dee reports that he’s not so good at the “give it back” part of fetch! He loves his toys but also loves to just cuddle and give kisses.

Mary Dee adds, “I can’t say enough good about LHAR.  Although people may be put off by the adoption requirements like references and home visits, it’s because you really love the animals and have their best interests in mind.  A big thank you to all of the fosters also – such a great program – and they do an awesome job. Finally, tell anyone thinking about getting a pet that if they wrap their hearts around a rescue their lives will be enriched in ways they can’t even fathom. 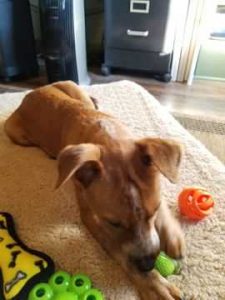 Sounds like Eddie and Mary Dee are a perfect pair! Thank you for giving Eddie his forever home and loving him like he deserves!