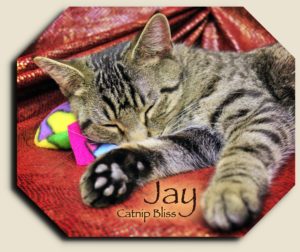 Jay is a handsome Brown Tabby, approximately 9 months old as of April 2019.   He was brought into Last Hope after being found outside an office building in Cedar Rapids.  His foster mom was visiting the LHAR adoption center when Jay decided he should get to go home with her … so off to Waterloo they went!   Jay is a chatterbox….he sounds like a grumpy old man with a raspy voice, but he’s just telling stories and letting you know how he feels.  From the time his foster family wakes up, until the time they go to bed, Jay is part of the busy household.  He is currently in a home with six other cats, two small dogs, and six humans (4 kids, 2 adults).  He will play with any one of the various animals in the household, he’s not selective, he just wants to have fun. 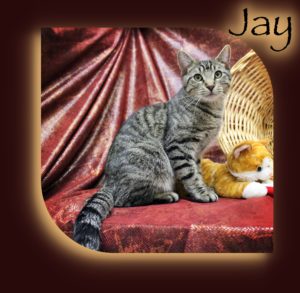 He is the LIFE OF THE PARTY!  When his humans arrive home, he can usually be found on any one of the available beds taking a cat nap, usually with another cat, but occasionally with one of the dogs.   If he can catch any one of his human cohabitors sitting down, you’re likely to find him curled up next to them.  If no one is sitting down, he’s usually following one of us around trying to get attention! While he wants to be petted, he’s more than content simply being talked to until you can find time to pet him or pick him up for some snuggles.   There is nothing shy about Jay, he wants to be where the action is, he likes to meet new people, he’s a people purrson!   He would do well in a house with other cats, dogs, and children.  If you’re looking for a companion that likes to be with you, Jay is your guy!