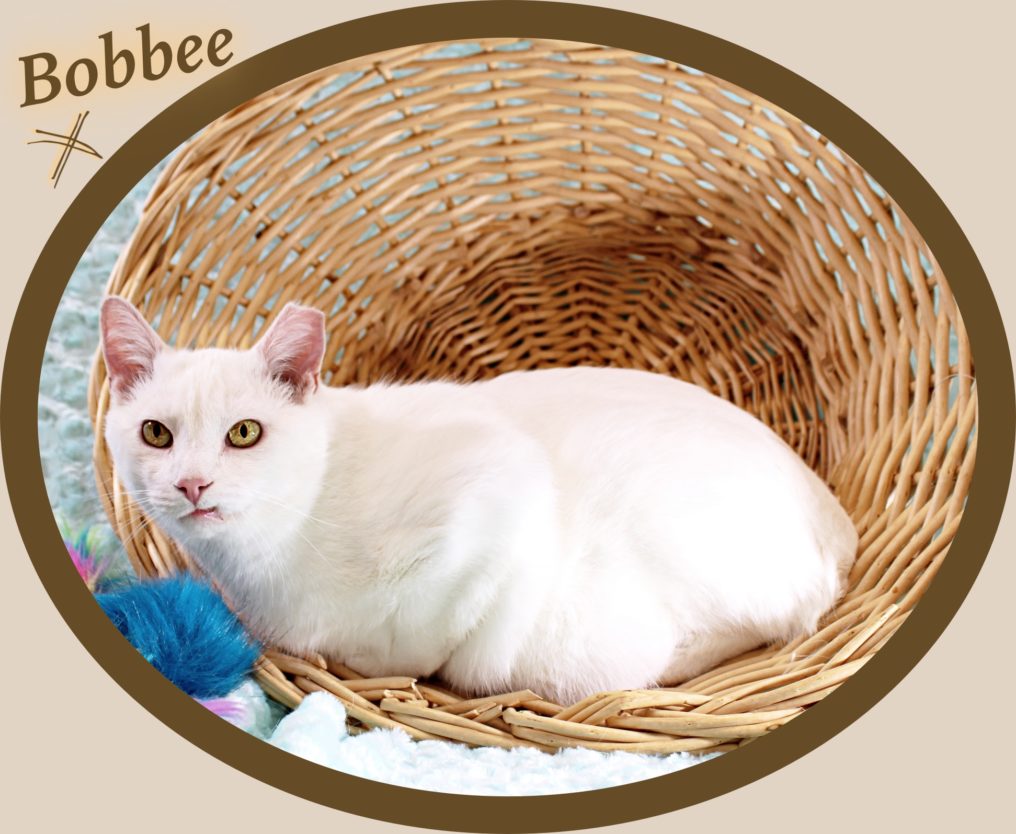 Hello!  My name is Bobbee and my foster mom would like to tell you my story…

“I was talking with my sister the other day about Bobbee. She said Bobbee is a pot that needs a lid. Huh? She then explained. If your kitchen is like mine, getting a pot or pan out involves a bit of searching for the lid that fits that particular pot. Are you Bobbee’s lid?

Bobbee has a story that we only know the last year of. He is around 9 years old. Bob was found in a hoarder’s house, in a pitch-black basement with other animals, in a cage by himself with no litter box, but he did have food and water. He was stained yellow from urine and very scared. It took a couple of months to build some trust with him. As he gained weight and his yellow hair turned white we learned more about his personality.  Bobbee watched the family and he really wanted to play with them. They were in a large pen, so taking a leap of faith, I put him in the pen too. He was in heaven! I spent lots of time sitting in the pen and petting and playing with everyone. I learned that if Bob got stressed or excited he tended to bite. He couldn’t jump up on my lap at first but now spends his days in my bedroom and has no trouble jumping on the bed. He LOVES feathers and wand toys. He will roll on his back with his feet in the air like a kitten. He’s a lap cat and my TV buddy. Bobbee does not like to be picked up. 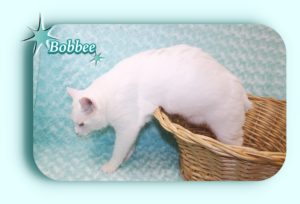 We made a trip to the vet and learned he has some arthritis and tender spots. He is on a joint supplement and a pain medication and both seem to help. He will revert to nipping when touched where it’s tender or he gets really excited and his new owner will have to understand it’s his way of communicating. He is a bobtail kitty, but to be honest, we are not sure if he was born that way or if someone ‘bobbed it’ for him; we wonder if someone tried to declaw some of his toes, too.  You will notice he is ear-tipped… he was NOT a feral cat, but when he was altered before LHAR was able to take him into our rescue, the vet doing his neuter thought he was a feral cat and ear-tipped him.  That’s just another part of this kitty’s journey through life. 🙁  If you look close at Bob you’ll see he has a snaggletooth look. Bob had a front tooth removed and it left him with his strange smile.  I think another cat for him to hang out with would be great if the other cat is laid back. I don’t know about dogs, he shows no fear when my two go up to his pen to say hi but that’s not a true test. I don’t think a home with young children would be a good fit.”

Bobbee’s adoption fee is $85 which includes neuter surgery, being up to date on vaccinations, and a microchip with lifetime registration.

If you think you might be Bobbee’s “lid,” please complete an application HERE.