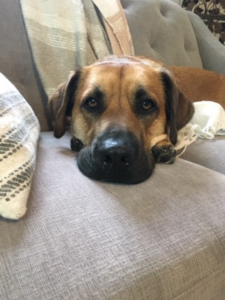 Last Hope rescued Phobos (formerly Scooby) from an abandoned house in northern Iowa. We couldn’t believe someone would leave him behind because he’s been such a great dog from day one!

Cara and Atulya were referred to Last Hope from friends who had adopted from us in the past. They met Phobos and just knew he was the dog for them. They appreciated the adoption process because it told them Last Hope isn’t just interested in helping people adopt a dog, but we want them to adopt the RIGHT dog for them. 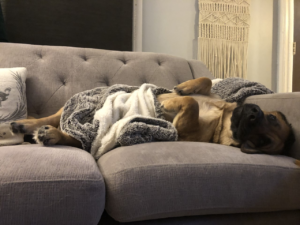 Phobos gets along with everyone: dogs, cats, babies, young children, strangers, elderly people, and does great in a crowd. Squirrels? Well, they’re another story!

The adjustment period was pretty smooth. At first, he was a little nervous when they left but after a while he could trust that they would always come back so he 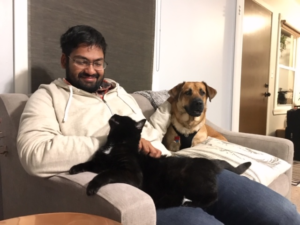 accepted being left alone at times. Phobos loves attention. He has a “job” – he visits hospice patients and he loves getting all the attention. He loves visiting friends, walks, and visits to the dog park. Cara and Atulya even have a bike wagon so they can take him along on bike rides. He even has a doggy best friend, Daphne! He is very well-behaved but can get a little stubborn sometimes. He gets along well with their cat, Moon and most of all, he makes his family laugh. 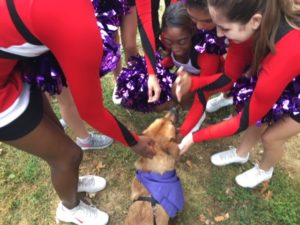 Phobos is known around town as being a very friendly dog and Cara and Atulya like to take him wherever dogs are allowed. They feel grateful that they contacted Last Hope and got matched up with Phobos.

And we’re grateful that they opened their lives and home to Phobos. He really hit the jackpot. Thank you Cara, Atulya, and Moon!