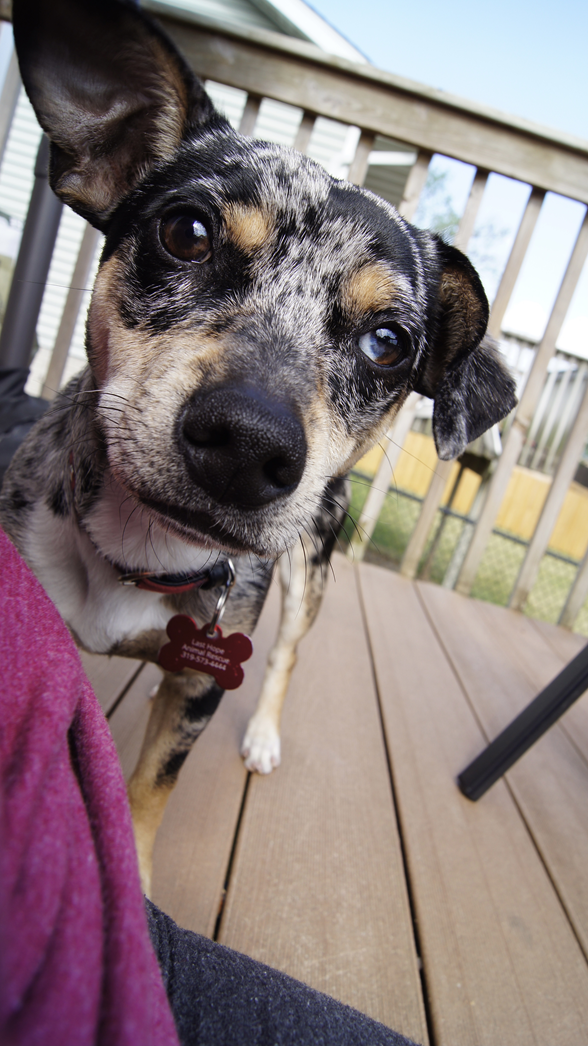 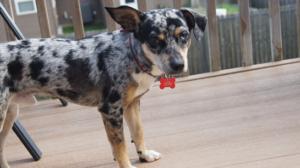 If you are looking for a young dog that isn’t 100% puppy, Rocko may be the dog for you. He is a great mix of playful puppy, playing with toys and chasing his tail and a loving cuddle bug. He is still young, so he does have a tendency to chew on things he shouldn’t once in a while but is easily corrected by giving him a toy or bone instead.   He loves to sit outside in the sun and explore the backyard. He loves to chase birds, so a fenced-in yard is probably best. We are working on going for walks without pulling on the leash, but it is so exciting and so much to explore that it takes him a while to settle into a nice walk.   Rocko learns very quickly and has already learned how to sit, shake and we are working on lay down. We are also working on house training. Once he was familiar with his foster home, he did not have many accidents, as long as he was let outside pretty often. Rocko is scheduled to be neutered in July, this is included in his adoption fee. 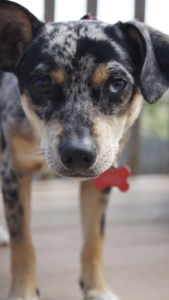 He sleeps in a kennel at night and has never had an accident in his kennel. But he is an early riser because he misses his people. Sometimes if you need a bit more sleep, you can bring him back to bed with you after he goes outside and he is happy to crawl under the covers, snuggle up to you and go back to sleep.   Rocko does well with the older beagle in his foster home, but he can be a bit jealous at times and can be a bit grumpy when he has a bone or food. We feed him in his kennel to help keep the dogs separated during feeding times.  We think he would like to roughhouse with another dog, but does get snippy in the face at times.    Because Rocko can be mouthy at times, he would probably be best in a home without young children. He took a few days to warm up to his foster dad, but now he adores him.

Rocko’s adoption fee is $300 and includes neuter surgery, being up to date on vaccinations and preventives, a microchip with free lifetime registration, and a free obedience class.

If you would like to meet this great guy, please complete an adoption application HERE.