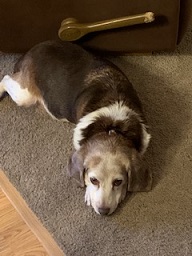 Bagel is one of the silliest, sweetest dogs you’ll ever meet.  She’ll stop in the middle of a walk to roll over to remind you that it’s time for a tummy rub.  She loves to be in your lap or curled up with a blanket.  She is relatively quiet for a beagle, mostly squeaking or whining when she’s happy and only baying when she’s after a squirrel.  She loves to be right by people or lounging in the sun.  Bagel is extremely picky about the dogs she likes.  She is in a home with a mellow older dog and they mostly ignore each other.  However, she’s been growly or snappy at other dogs she’s seen, including on walks, in our house, or in the other dog’s home.  She would probably prefer to be an only dog.  She has been around children 5 and older and does great with them, other than needing reminders not to chew on their toys. 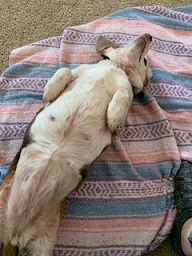 Bagel is almost totally house trained but needs to be encouraged to go out every few hours.  She will also submissive pee when there’s yelling or she’s frightened.  She would like a fenced yard so she can explore without accidentally following her nose too far.  She’s learning manners like it’s not polite to gently jump up on people that aren’t petting you enough.  She does well on a leash until she puts on the Beagle Brakes and decides it’s time for a tummy rub.  She will also not allow you to stretch, do yoga, or anything else on the floor without climbing on you and reminding you that it’s time to pet her.

Bagel’s adoption fee is $250 and includes spay surgery, being up to date on vaccinations and preventives, a microchip, and a free obedience class.

If Bagel sounds like the muffin for you, please complete an adoption application HERE.